Jackie Oates is an English Folk Musician, Singer, Performer and Educator. Jackie lives in Oxfordshire with her young family. 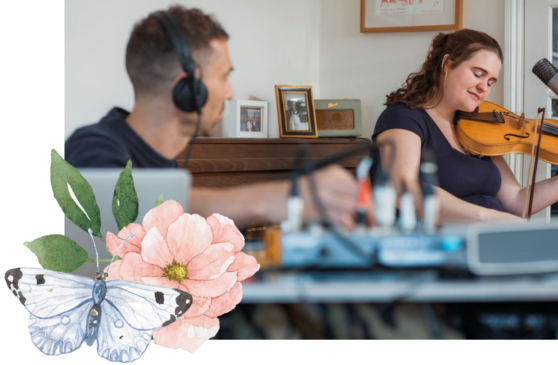 ‘Needle Pin, Needle Pin’ is very much a homespun album, recorded as live during the first weeks of January 2020. Oates and Spiers first started playing together during spontaneous guest spots at Nettlebed Folk Club. They began playing extended sets and working on material from their native Oxfordshire, including the ‘Lace Tells’ that form Jackie’s radio ballad ‘The Lacemakers – the Lost Art Of Telling’. The album features tunes and songs from the Oxfordshire area, and comes as a limited edition, handstamped, hand made album.

‘It’s a treat to listen to, with joyful pieces like Congleton Bear (telling an unusual story from the Cheshire town) and a brandy-based pair of slip jigs particularly full of sunshine. Oates and Spiers are a fine match, the tunes elegantly paced and played, while Oates remains one of our finest singers’.
Mark Dishman, Folk Witness

‘Needle Pin, Needle Pin packs a great amount of variety into its 36 minutes, with the three musicians bringing the source material to life, in an unflashy yet well crafted manner. The result is a highly listenable collection of music that belongs on present day folk fans’ CD players as much as it does in a museum’.
Nick Hart, Bright Young Folk

The Joy of Living features songs made famous by folk greats including Ewan McColl, Lal Waterson and Davey Steele, as well as carefully picked songs from artists such as John Lennon and Darwin Deez – all interpreted in Jackie’s inimitable style. Recorded at home in Jackie’s kitchen (with baby Rosie in attendance) she collaborated with fellow Imagined Village alumni and producer Simon Richmond to create this intimate, touching and uplifting collection. The album also features performances by friends from the world of folk including Mike Cosgrave, Barney Morse Brown, John Parker and Jack Rutter.

Press reviews for The Joy Of Living

‘An intensely personal folk gem….a moving, depth-filled album. Oates should be deeply proud of it.’ The Guardian **** 4 stars

‘A compelling, spirited, emotional rollercoaster of an album.’ Folk Radio

‘The soaring purity of Oates’s vocals washes through the songs leaving them like clean streets after a bout of rain.’ The Arts Desk 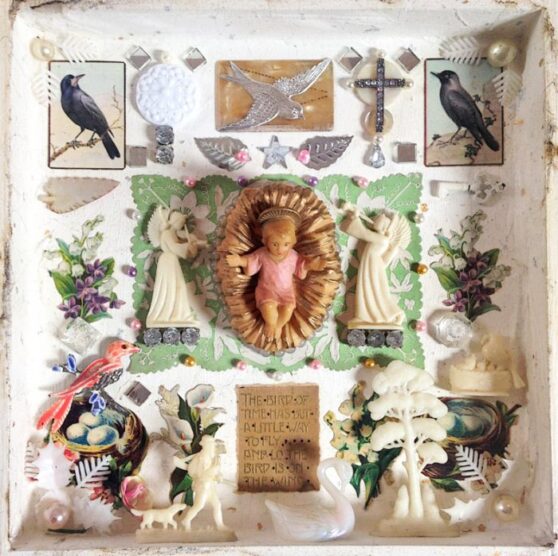 ‘Jackie and Megan are supported on the EP by Pete Thomas on Double Bass and the whole thing comes together quite beautifully. “What’s The Use Of Wings” written by Brian Bedford is quite simply a stunning piece of folk music that sends shivers up my spine.’ FATEA 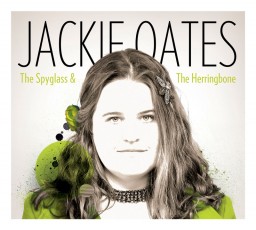 Press Reviews for The Spyglass And The Herringbone

‘Central and essential to the mix is Jackie’s clear, pure and beguiling voice…Another maturely sophisticated offering further enhancing her renown as a leading exponent of contemporary English folk’. Living Tradition

Recorded in England and Iceland in late 2012, Lullabies sees Jackie venture into the rarely explored cannon of traditional and contemporary sleep songs. Featuring contributions by Belinda O’Hooley, Chris Sarjeant, Chris Foster and Bara Grimsdottir, it was produced by Richard Evans and is released by ECC Records.

‘..starts magnificently with the drop-dead-gorgeous Dream Angus, on which her exquisite vocals are matched by her own viola, an Icelandic string section and fine piano playing from Belinda O’Hooley.’ Guardian 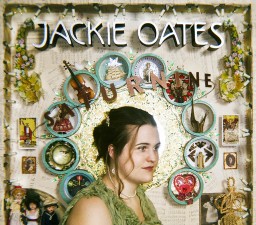 ‘She must surely now be considered among the highest echelons of the modern wave of British folk acts…  Devling into her adopted home, the west country of England, for influence and inspiration, she’s added guile, mystery, quaintness and indeed eccentricity to the alluring charm and simplistic style at the crux of her initial appeal…before you know it you have been sucked completely into the album’s quirky, faintly unearthly atmosphere.  Which I guess is what she intended all along.’ Colin Irwin, fRoots

‘The twelve dark and twisted ballads are largely about murder, violence and magical trickery.  But sung in Oates’s disinfecting voice an interesting tension arises.  It’s the musical equivalent of seeing the purest girl-next-door you know smoking a fag…a confident arrangement of traditional tunes, brilliantly executed and startling to hear.’  Arts Desk (CD of the day 31st Aug ’11)

‘A luscious album…rich in so many ways’ Songlines

‘What’s most impressive here is the way the arrangements and instrumentation weave together so seamlessly…comparisons with June Tabor are apt.’ Uncut ****

‘Whether seductively delivering stalwarts like Sweet Nightingale and Brigg Fair or linking with The Claque on Four Pence A Day and Marrow Bones, it’s the rustic beauty of Oates’ voice that enthrals.’ Mojo

‘Oates has emerged as a frontrunner among the new generation of Brit folkies, marked out by the purity of her voice…An exquisite piece of
chamber folk……makes for an atmosphere of rare enchantment’ The Observer

‘Standing out from English folk’s remarkable new wave, Oates has the finest voice of them all…Saturnine shows Oates at the top of her game’ Independent On Saturday [album of the week].

‘Charming, cool and tasteful’ The Guardian

Hyperboreans is the coming-of-age album for Jackie Oates.  Produced by her brother Jim Moray and featuring a title track written for her by Alasdair Roberts, it sizzles with a new confidence and maturity.  Her uniquely beautiful vocal comes to the fore throughout the album adding a new freshness to traditional songs including ‘The Pleasant Month Of May’ and ‘Young Leonard’.  There is a show-stopping and deeply moving rendition of Past Caring based on a poem by Australian Henry Lawson as well as a joyfully breezy cover of Birthday by The Sugarcubes.  The album concludes with an unforgettable performance of May The Kindness by little-known Devon songwriter Dave Wood. 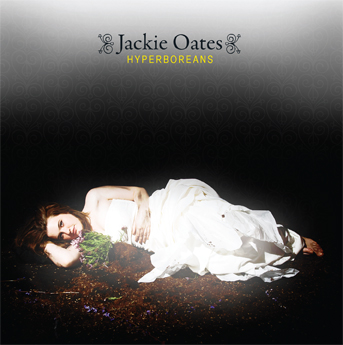 ‘The girl is a genius’ Mike Harding, BBC Radio 2

‘Her ebullient cover of Sugarcubes’ ‘Birthday’ and the rush of electronica on the desolate ‘Past Caring’ are pure genius on a richly rewarding album.’ Independent On Saturday [album of the week]

‘Marking the full graduation of Jackie Oates as a front-line talent.’ fRoots

‘She has a voice full of delightful twists and quirks’ Word

‘Jackie Oates is deservedly becoming yet another young celebrity in the new folk scene.’ The Guardian

‘Expectations for Hyperboreans were high. On all fronts Oates delivers, with beautiful singing, innovative arrangements and an intriguing selection of songs’ ***** Songlines

‘This album leaves us in no doubt that Jackie Oates has arrived and is one of leading young folk artists.’ Electric Ghost

‘Oates has a clear voice that is at once traditional and modern, as embodied by the spine-tingling closing track.’ Q

‘English folk-pop, well chosen songs…and as pretty as some spring mornings.’ The Independent

‘Oates’s third album – produced by brother Jim Moray – is a subtle leap of faith for the outstanding young singer.’ **** The Telegraph

‘Butchers Boy…sung as a duet with Alasdair Roberts is sublime, catching every nuance that makes Jackie so special.’ Spiral Earth

Jackie’s second album features great performances by a host of wonderful friends and musicians from Devon and beyond, including the glamorous Jim Causley and Matt Norman, fellow Wistmans Woodfolk Steve Turner and Andy Clarke, Nick Wyke and Becky Driscoll, Sean O’Shea, Phil Beer, James Dumbelton, Gris Saunderson, Nick Cooke, Jim Moray, Tim Van Eyken and Belinda O’Hooley from the far north. Once more, the album has been produced by Phil Beer and is released on his label, Chudleigh Roots. 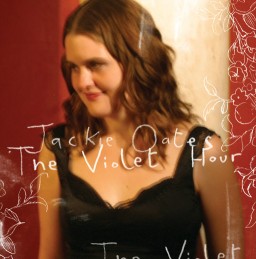 Press reviews for The Violet Hour

‘This is an accomplished and beautiful album from a unique singer and musician, ‘The Violet Hour’ must surely be a contender for Folk Album of the Year.’ Channel 4 Music

‘The album is subdued, delicate, its guest musicians hovering discreetly in the background.’ Financial Times

Recorded and produced by Phil Beer, in Exeter between Jan 2005 and May 2006, and features Ed Rennie, Phil Beer, Jonathan Shoreland. Martin Keates, Belinda O’Hooley, Matt Norman and Emma Blackie, with photography by Steph Cheesman and design work by Brad Waters. The album is a collection of mostly traditional English ballads and songs of a bleak nature.